This summer’s press was once again abuzz with headlines and images of the exodus of thousands of migrants, knocking at Europe’s door. The scenario of a massive number of vessels overflowing with people fleeing from their countries towards southern European shores is no news to Europe. Although the state of alarm has long been declared, the escalation of this summer’s dramatic occurrences forced Brussels and the Member States to raise their level of attention towards the Mediterranean Sea.

New measures were drafted and the on-going debate regarding their implementation is one of the hot topics jeopardizing the stability of the European Union to the core. The States more decidedly issuing for a direct intervention were those located on the southern shore, held responsible for the rescue of the migrants in their territorial waters. Italy declared the costs of “Mare Nostrum” operations unsustainable and thus disconfirmed their renewal for 2015, entrusting the management of the migrants’ emergency to the new EU-flag operation, “Triton”. The state of emergency was declared both from a humanitarian and a logistical perspective, and the key-role of Italy in the happenings is well known. Nonetheless, there is a chapter of the story which has not yet found its representation in the media. Everybody knows about those rescued, but has anyone ever wondered about the rescuers?

One expects the navy and the coastguard ships to be the main rescuers of migrant vessels but data tell a different story. Of the 982 units employed in rescue operations in 2014, less than a half belonged to the military navy. The merchant navy ranks second for the number of rescue missions, actually outnumbering the coastguard. So far, 1,300 merchant ships were diverted to provide first aid to 42,000 people in 2014 and over 15,200 in 2015[1]. If we focus on the meaning of these numbers, we will not fail to realize that about 254 cargo ships, contract bound to delivery dates and crewed by men untrained for these kind of operations, were first in line to face the humanitarian emergencies. 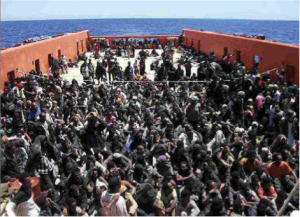 This constitutes the biggest rescue work ever accomplished in the history of the merchant navy. Providing first aid to these people is certainly a duty for all seafarers in the fulfillment of the long established maritime tradition of recruiting those in danger, as well as under the obligations determined by the United Nations Convention on Law at Sea (UNCLAS) and the International Convention on Maritime Search and Rescue (SAR). Still, these obligations refer to ordinary circumstances in which rescue at sea is considered an exceptional event for civil vessels. However, in the past few years, the extraordinary has become ordinary and the involvement of merchant ships in rescuing migrant vessels has become systematic.

What’s wrong with that?

Consider a ship with dangerous cargo, for example inflammable goods (oil, petrol, gas), rescuing immigrants drowning from a sinking vessel and having to board 500 to 1,000 people who cannot speak English or Italian. How are 10 to 15 crew members supposed to handle such a crowd of men, women and children, all the while trying to prevent any accidents that such a situation may implicate? Additionally, restrooms and emergency kits on cargo ships are stocked in proportion to the crew and cannot sustain a massive load of passengers, which makes it difficult to provide help to the rescued in need of immediate medical assistance, such as women who are pregnant or in labor (as per reported circumstances). In 2014, even supply vessels deputed to the emergency escape service of the staff on oil platforms were employed in rescue missions. One of this vessels received no less than 62 calls for rescue missions during 2014 and 26 in 2015, boarding up to 1200 people in a single operation with a crew of 10 people[2].

From a strictly economical perspective the costs of rescue operations, sometimes requesting up to 2 additional days of travel, rest on the ship-owners and on the ports, frequently in Sicily or Calabria, where migrants are disembarked. This issue was emphasized by the Italian merchant navy, Italy being the country responsible for the broadest Search and Rescue zone in the Mediterranean. In this regard, the implementation of the operation, “Triton” partially mitigated the pressure on the merchant navy (around 160 interventions in 2015 against 254 in 2014), but the numbers are still high and the integration of the SAR operations with the commercial activities is unsustainable to the ship-owners.

To all seafarers, there is an unbreakable law, which constitutes a seaman’s code of honor since the beginning of times: when a ship is sinking, it has to be rescued, no matter the cost. The merchant navy has not missed a call and will keep rushing to help as long as someone will call.

But to preserve the safety of their crew and operability of their ships, merchant vessels cannot be viewed as vehicles for humanitarian rescue in large-scale operations.

In March 2015 the European Community Shipowner’s Association (ECSA) and the International Chamber of Shipping (ICS), together with other labor organizations, issued a call for help, in order to better face what seems to be a migratory flux which is not going to decrease in the short run. In such conditions, the employment of UN vehicles for humanitarian assistance at sea, with UN designated ships and aircrafts to monitor and coordinate the SAR regional centers and the rescue operation could be an important contribution.

Ludovica lives in Italy and studies European Affaris at the Roma Tre University. After obtaining a Bachelor’s Degree in Political Sciences and International Relations her research interest focuses on European Migration Policy and Asylum law. She is writing a Master’s Degree thesis on the External Dimension of EU Migration Policy.

Another issue to be faced in the context of one of the biggest humanitarian crisis of the last decades.